Dokebi Road also called Mysterious or Ghost Road in Jeju where cars roll uphill with the engine turned off. Notice the water mark on the road at the right.

This is an illusion. Due to the lack of a true horizon, subconsciously our judgement of a slope is misled by the false horizon in that area. This is not unique to Jeju alone but the Koreans have done a great job travel marketing this Mysterious Road or Ghost Road into a tourist spot.

After that, we’re going to have our dinner (sashimi)

Jeju-do is a paradise for lovers of raw fish (in Korean, hoe). The mild flavor and chewy texture of fresh local fish is exceptional.

What we bought on that day

Early in the morning, we’re having our buffet breakfast at the same hotel that we stay. 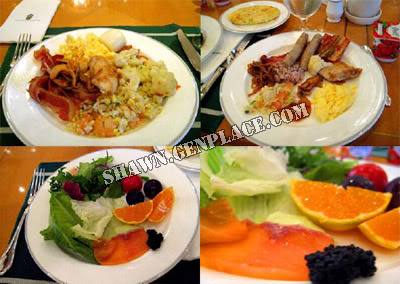 Next, we’re transfer to Jeju International Airport to Daegu

Nearly 1 hour, we had reached Daegu

Although Daegu is Korea’s 3rd largest city, much of it still retains a countryside feel. The views of Palgong-san to the north and Ap-san to the south are hidden by smog less often than the mountains encircling Seoul. The area is a major textile center for Korea, producing vast amounts of cloth and clothing. It also serves as a major hub for metal and machine industries, with several manufacturing plants from the nation’s largest conglomerates. Agriculturally, the area has much farmland and is especially known for its apples (resulting from grafting American apple tress to local crab apple trees by Presbyterian missionaries in the early 20th century). Today, our first visit place is Bulguksa

Bulguksa is a Buddhist temple in the North Gyeongsang province in South Korea.

It is home to seven National treasures of South Korea, including Dabotap and Seokgatap stone pagodas, Cheongun-gyo (Blue Cloud Bridge), and two gilt-bronze statues of Buddha. The temple is classified as Historic and Scenic Site No. 1 by the South Korean government.

The stone pagoda Dabotap has a staircase on each of the four sides. Four stone square pillars support the pagoda’s first roof, where is build a square stone railing. Inside the railing is the body of the pagoda, and above it, standing on the second octagonal-shaped roof surrounded by an octagonal stone railing, are eight bamboo-shaped stone pillars support the octagonal-shaped lotus stone carved with sixteen petals.

After that, proceed to the local Korea buffet restaurant for our lunch.

Strong people don’t put others down, they lift t

Enjoy the little things in your life, because one

It only takes a few seconds to hurt someone. But s

Talk about your blessings more than your problem!

Learn to sit back and observe, not everything need

Before and after you become a leader! Blog: shawn

It always impossible. That’s why the people love

What is knowledge and wisdom? Blog: shawnliv.com #